Two artists known for their unique creative styles that are anything but ordinary promoted their collaboration on display at Imagine Museum for the UN Year of Glass at an exclusive art reception. 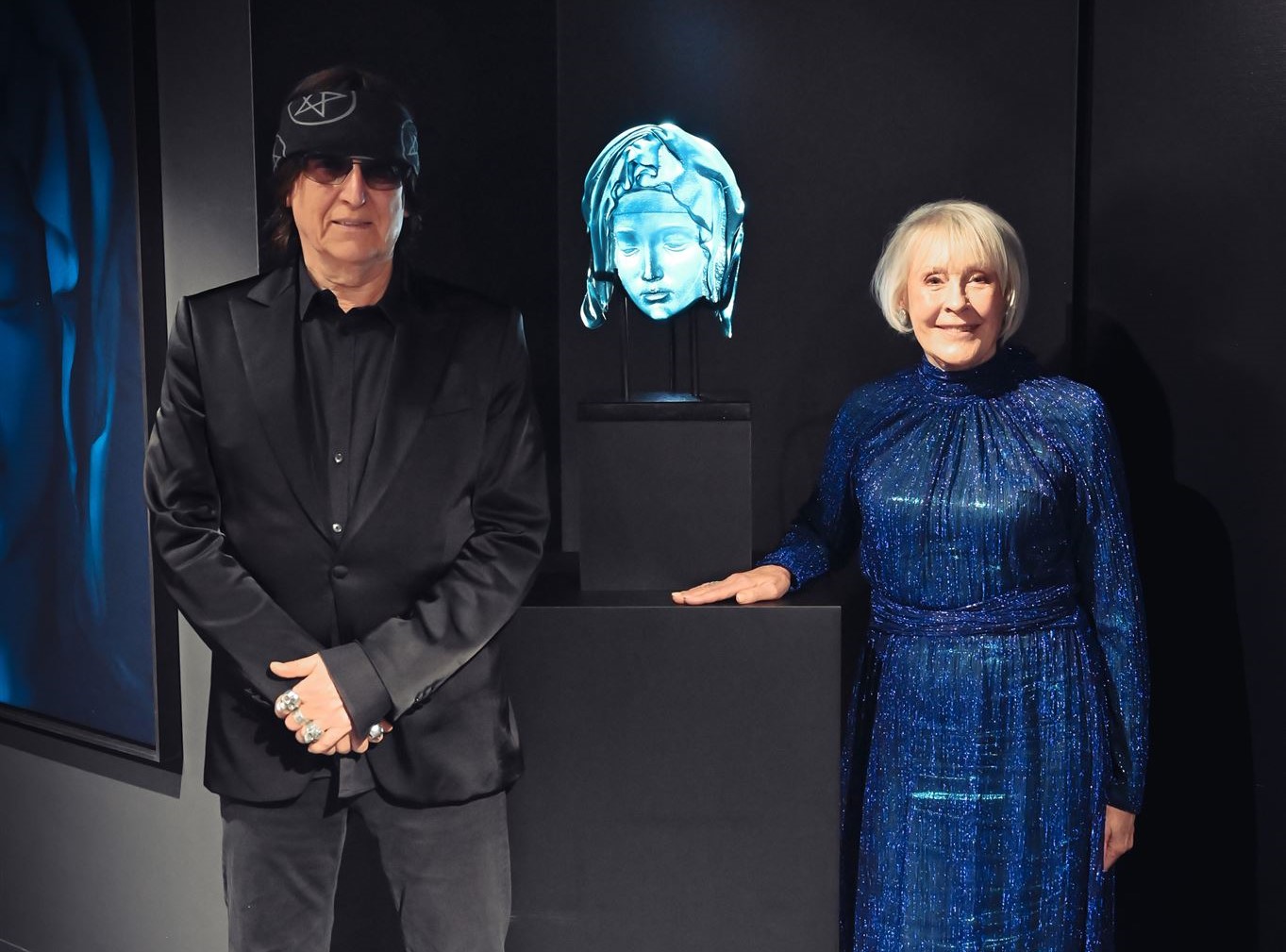 As a part of their Glass Coast Studio Tour series, Imagine Museum of Contemporary Glass Art hosted a special reception to honor artists of the exhibit “Blue Madonna” by Gottfried Helnwein and Trish Duggan.

“Blue Madonna” is a collaboration based on the face of Mother Mary in Michelangelo’s famous sculpture the Pieta. The Pieta is known for representing the compassion and motherly love Mother Mary shows her son, Jesus. Ms. Duggan’s glass sculptures of the Pieta’s face were made from a mold she was able to obtain from molds that had been made previously in gold, bronze and silver from the Vatican.

“The blue monochromatic paintings are adaptations of female faces by the great Renaissance masters, which I consider the epitome in the depiction of femininity.” – Gottfried Helnwien

Fellow artists, diplomats, influencers and some of society’s finest from the greater Tampa Bay area turned out to hear from the artists on the background story that resulted in a ethereal monochromatic series that pays homage to the power and beauty of women; mothers in particular, in the most alluring shades of blue.

At first glance, a collaboration between Gottfried Helnwein and Trish Duggan might not be expected. The celebrated Austrian artist Gottfried Helnwein, is known for his mysteriously dark and often controversial life-like paintings. His work often references taboo and sensitive issues from recent history, especially Nazi rule in Europe, the horror of the Holocaust and childhood abuse.

As an American artist Trish Duggan on the other hand is known for her bright and colorful glass sculptures that feature themes that explore science, space travel, the beauty of nature and exploration of the known and the unknown universe.

Both however, are artists that think outside the box and in concepts of abundance. Ms. Duggan often works in series of sculptures and to date has produced over 10,000 pieces. Mr. Helnwein’s works are painted on large canvases and outdoor murals done on a grand scale. Mr. Helnwein has exhibited his works across the world from the renowned Albertina museum in Vienna to Art Basel Miami and the State Russian Museum to name a few.

As Ms. Duggan describes it. “Years ago I came up with the idea to do a collaboration with my friend Gottfried Helnwein after visiting him and his family at his spectacular castle in Ireland. His highly controversial artwork conveys a very strong message, however I saw a gorgeous enormous painting in blue in his castle that really struck me! I came up with the idea of doing a collaboration with him that would convey the utter beauty of women and mothers. ”

There are 16 cast glass sculptures of the face of mother Mary, several decorated with shells and pearls surrounding her face. Ms. Duggan also produced 24 blue blown glass vases which are inscribed with the word mother in 24 different languages.

Mr. Helnwein created 9 large paintings of some of the art world’s most well known women for the exhibition including images of Michelangelo’s Pieta, Johannes Vermeer’s Girl with a Pearl Earring, Leonardo Da Vinci’s Lady With An Ermine and several others.

Mr. Helnwein said, “The blue monochromatic paintings are adaptations of female faces by the great Renaissance masters, which I consider the epitome in the depiction of femininity. With these portraits, I wanted to pay tribute to the spiritual aspect of womanhood, a principle often ignored in our materialistic age. In all spiritual traditions, since the earliest days of mankind, the most essential values and the supreme states of being are considered female.”

The “Blue Madonna” is currently on display at Imagine Museum. Tickets to see the exhibit can be purchased on their website. www.imaginemuseum.com 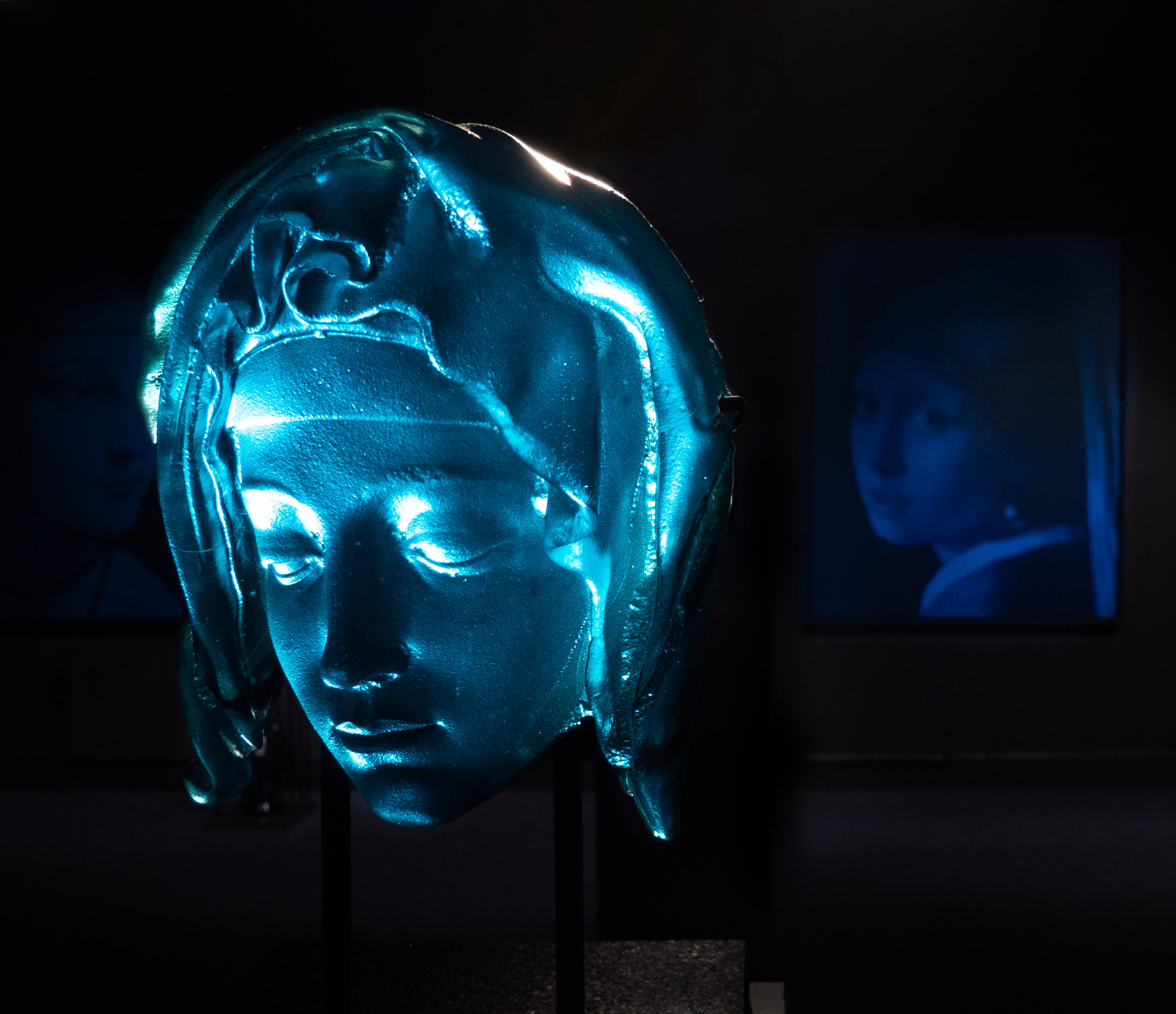 “Blue Madonna” is based on the face of Mother Mary in Michelangelo’s famous sculpture the Pieta. The mold from the sculptures was acquired from the Vatican. 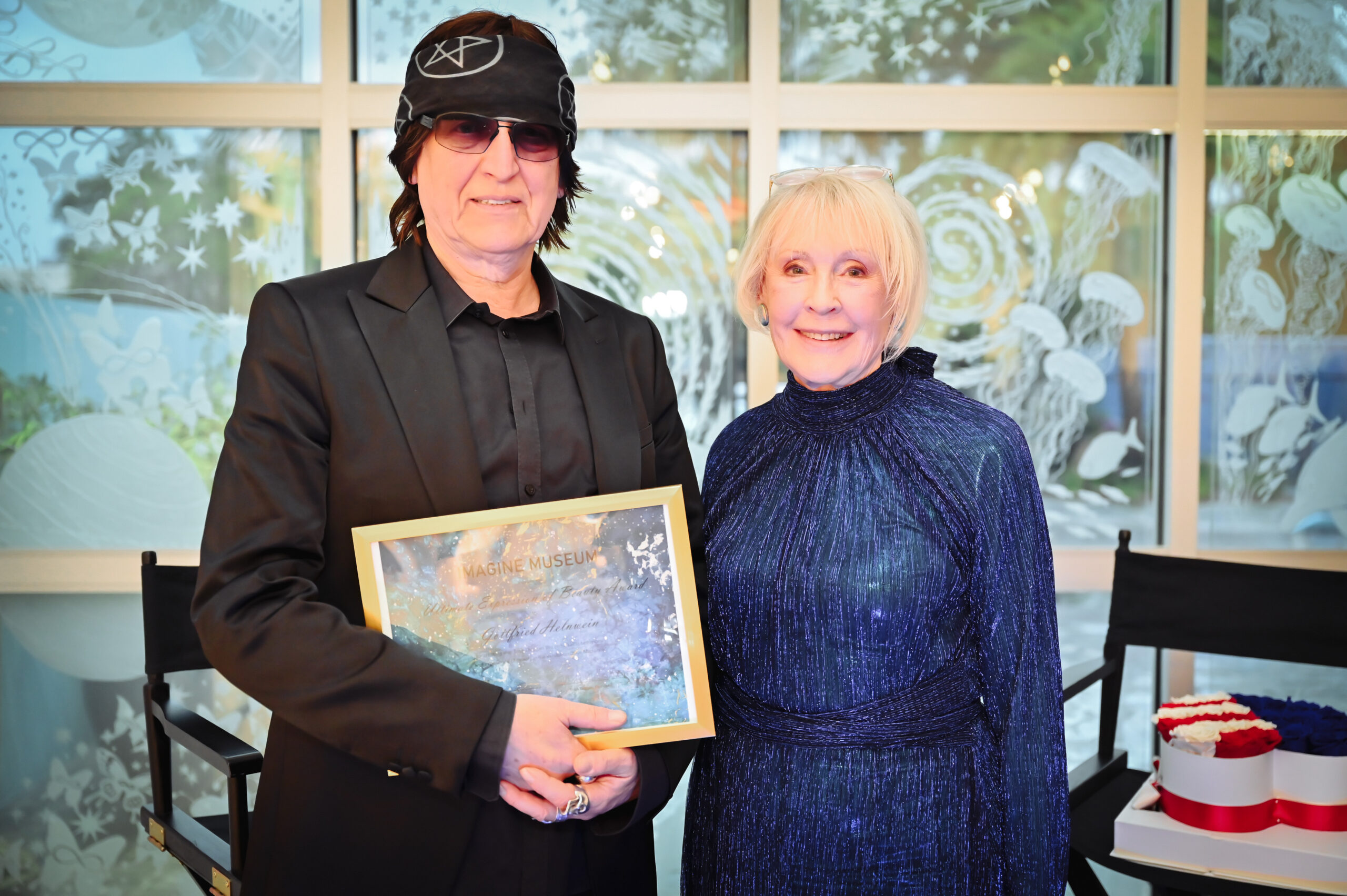